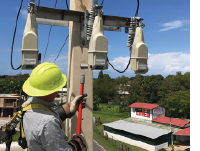 Electric customers in three Florida cities benefited from fewer power outages thanks to technology installed on power lines that feed electricity to customers. The installation was part of a technology demonstration project coordinated by the Florida Municipal Power Agency, an Orlando-based wholesale power agency, with the Town of Havana, Keys Energy Services (Key West) and Tallahassee.

The technology, called TripSavers, is a device capable of detecting faults on power lines, which can lead to outages, and clearing the problem to maintain power to customers. The devices can resolve many common fault conditions caused by animals, lightning and vegetation without the need to send lineworkers to the scene.

FMPA identified a deployment strategy based on varied factors from the municipals. The project goals included reducing outages on laterals and decreasing number of momentary interruptions.

TripSavers increased the overall system reliability of the three Florida municipal electric utilities compared to the prior year period and showed successful results including:

• Prevented 1,731 customer interruptions.
• Showed that even a small deployment of the technology can have a big impact to a city’s reliability.
• Proved that targeting electric lines that historically experience the most interruptions yields the most benefits.
• Showed that the technology can be beneficial to utilities of varying sizes.
FMPA was awarded a research grant from the American Public Power Association’s Demonstration of Energy and Efficiency Developments (DEED) program. In addition to the grant, the project was funded by FMPA, the three participating cities and S&C Electric Company, the manufacturer of TripSavers.